Don Lee believed in having respect for other people. He built Lee Container on the principle that everyone associated with his company – customers, employees, suppliers, and distributors – should treat each other as they would want to be treated.

Mr. Lee believed in the importance of honesty and of pride in a job done well.  Among his Lee Container Family, he promoted what he called a “can-do” attitude.

Over 25 years later, the success of his family-owned business, now a national leader in the packaging industry, shows that the next generation has remained true to these founding principles.  And, Lee Container continues to be a trusted partner that reliably delivers value to its customer’s bottom line.

Donald Lee purchases the plastic blow-molding assets of Brockway-Standard Company to start up Lee Container in Valdosta, Georgia. The Company opens with 3 production lines, serving among other customers, Ciba-Geigy in Crop Protection and Chevron in Lubricants. 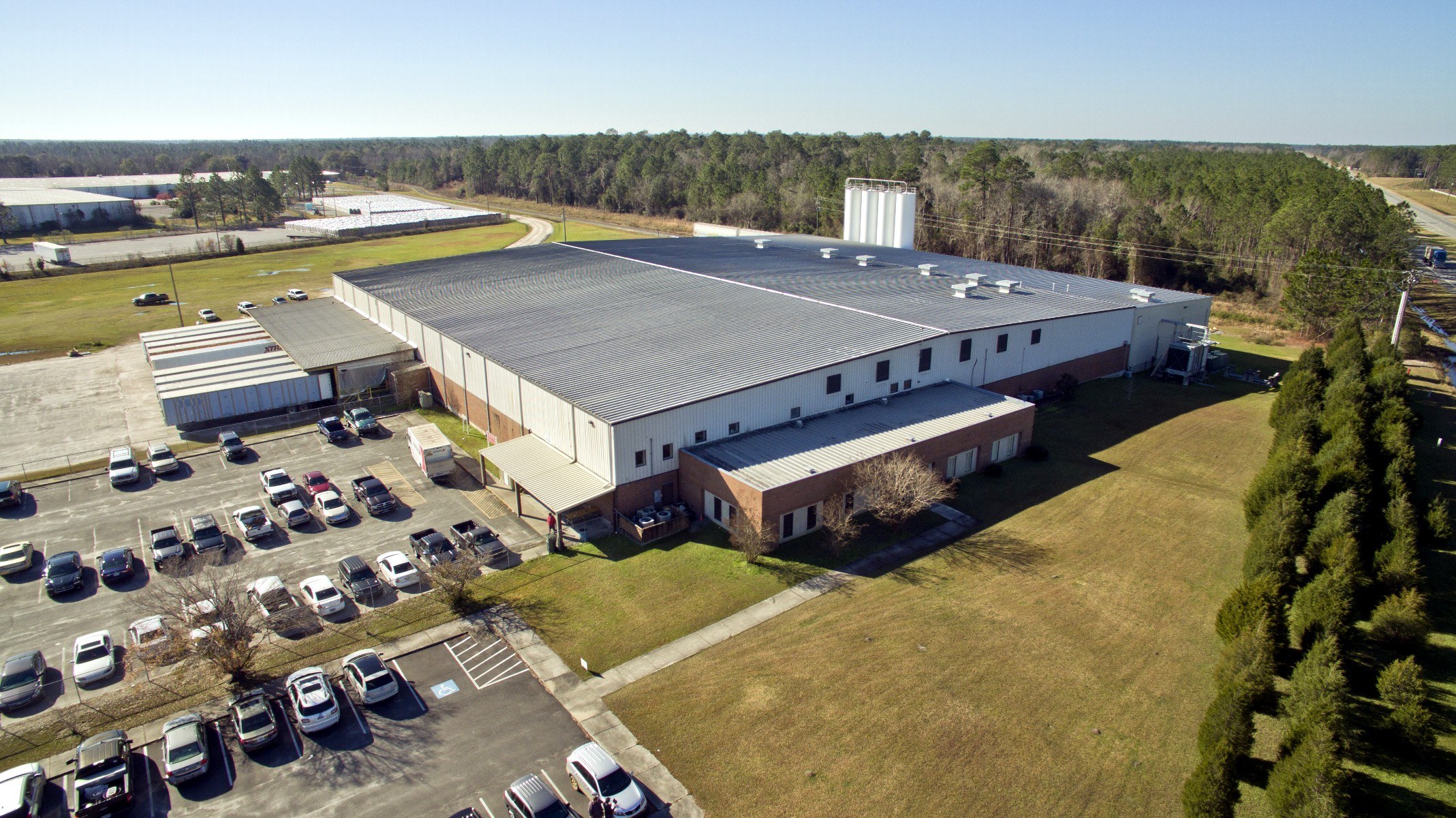 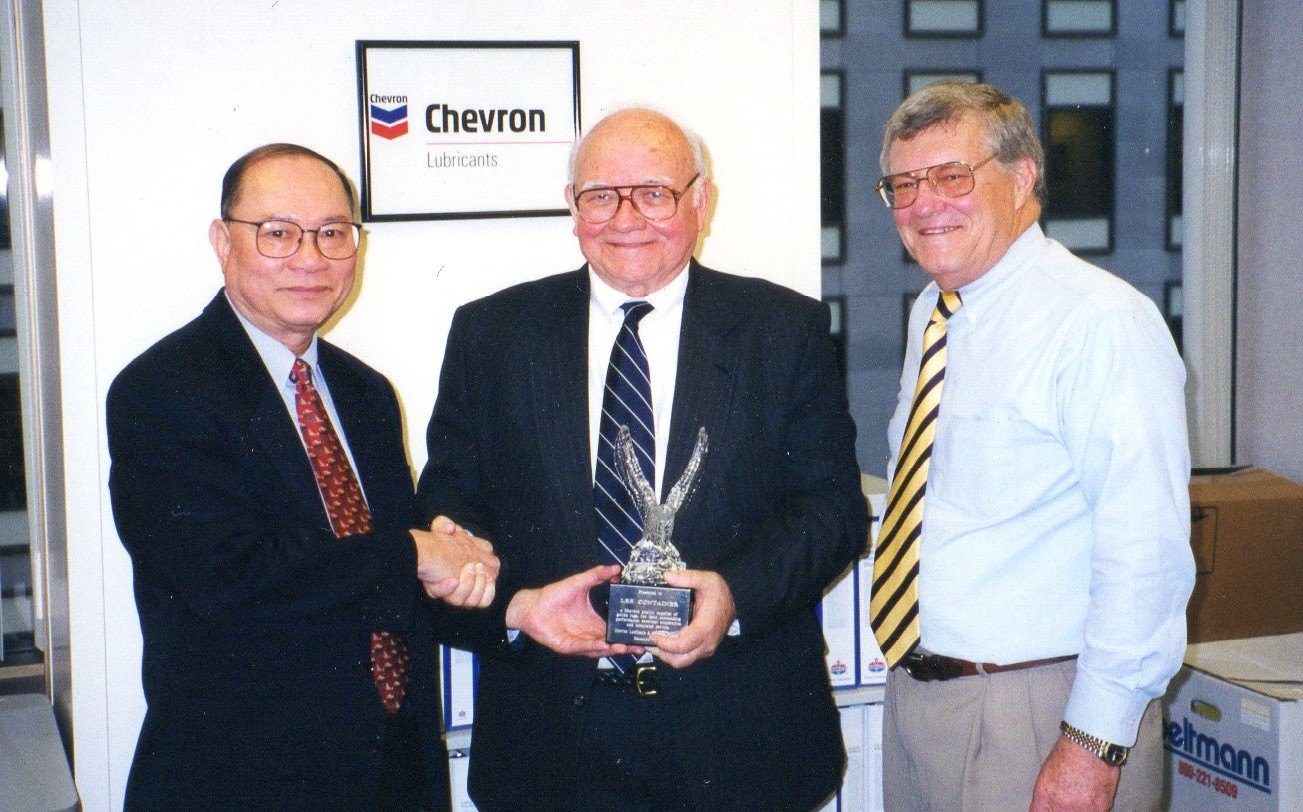 Lee Container earns ChevronTexaco’s prestigious Crystal Eagle Award for “Outstanding performance, excellent cooperation, and unequaled service.”   Earl Cox of ChevronTexaco expressed his appreciation as follows, “We have only awarded the Crystal Eagle four times in the past five years,” he noted, “so our suppliers have to commit themselves to excellence over a period of years to achieve this honor.” 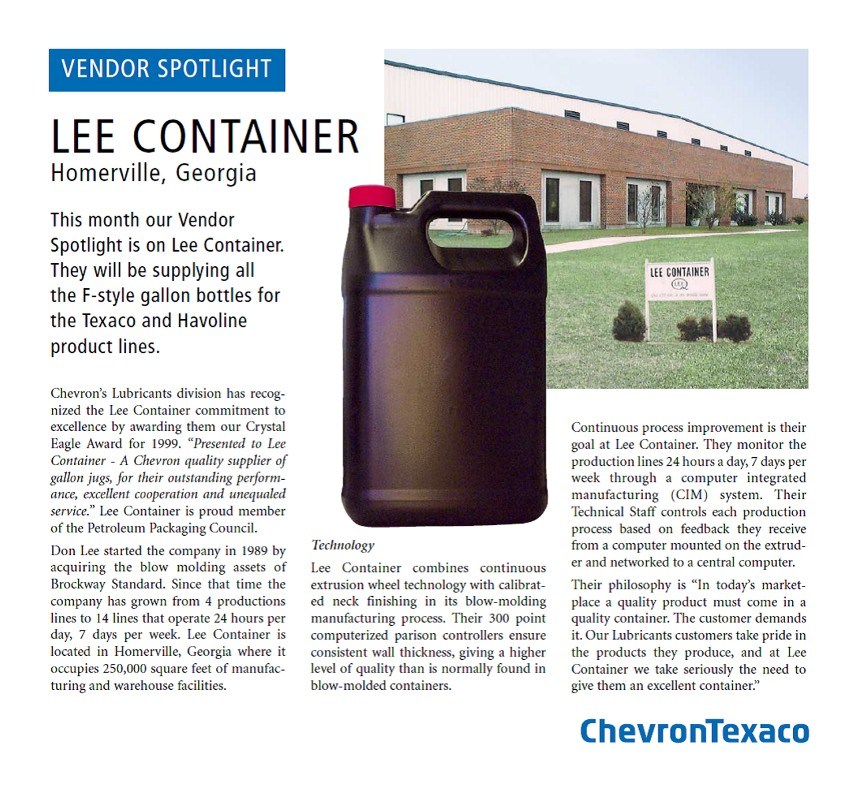 ChevronTexaco recognizes Lee Container’s commitment to quality, technology, and service in the Vendor Spotlight of their packaging newsletter sent to customers and suppliers world-wide.

Georgia Manufacturer of the Year 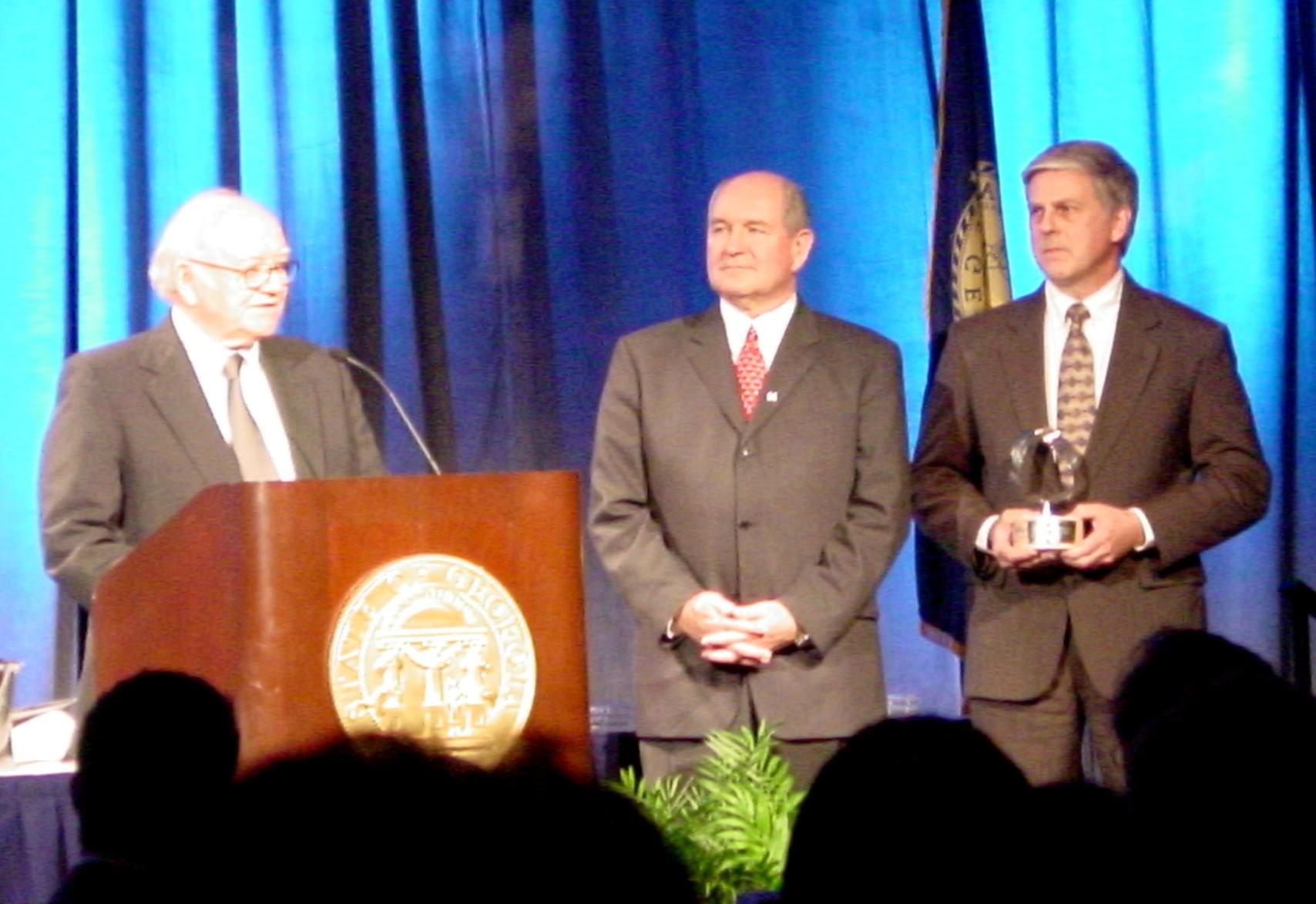 On April 17, 2003, Georgians for Manufacturing honors Lee Container as Manufacturer of the Year, in the Small Business Category.  Georgia Governor Sonny Perdue makes the presentation to Don Lee, CEO of Lee Container, at the Governor’s Awards Luncheon in Atlanta. 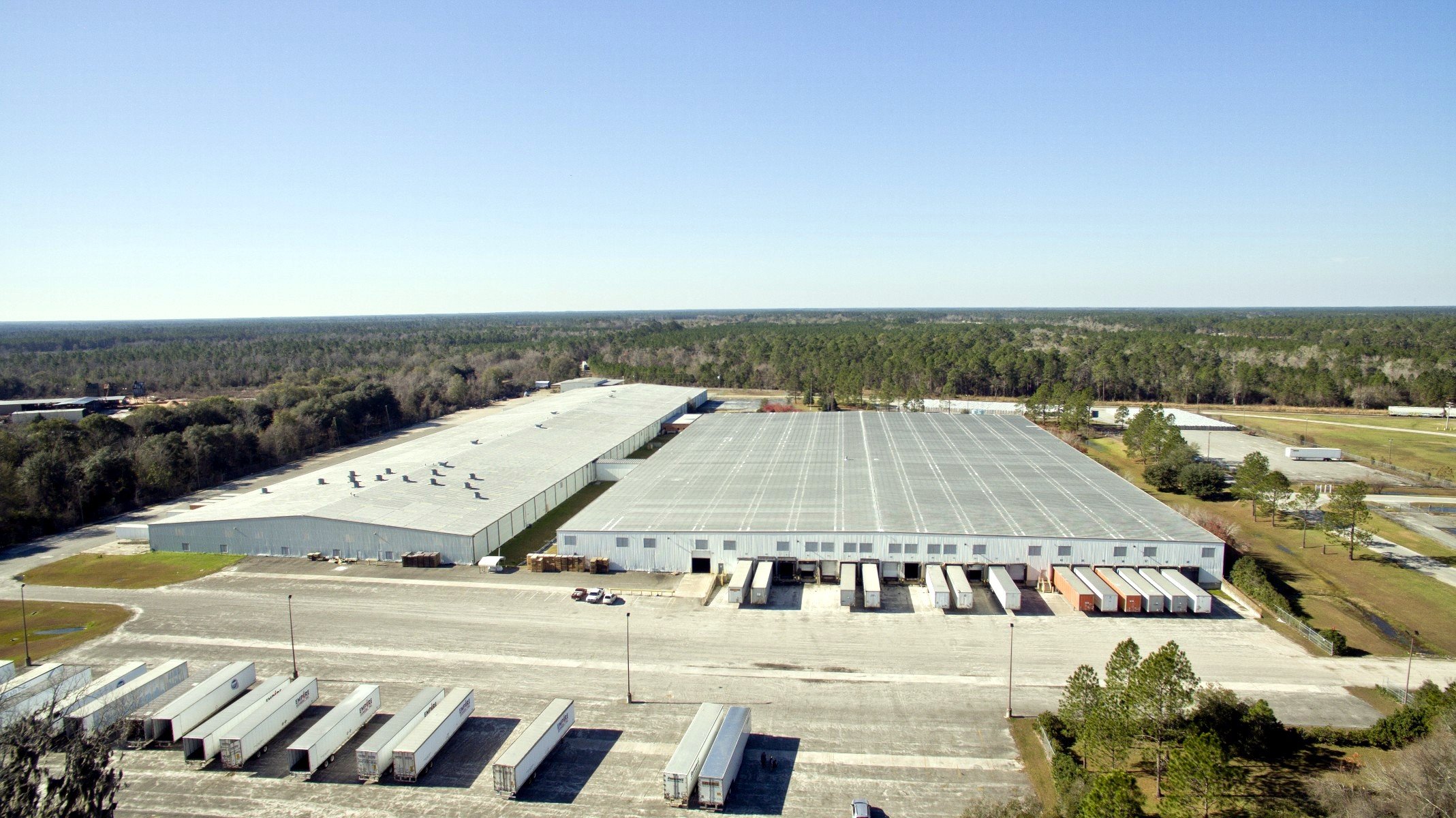 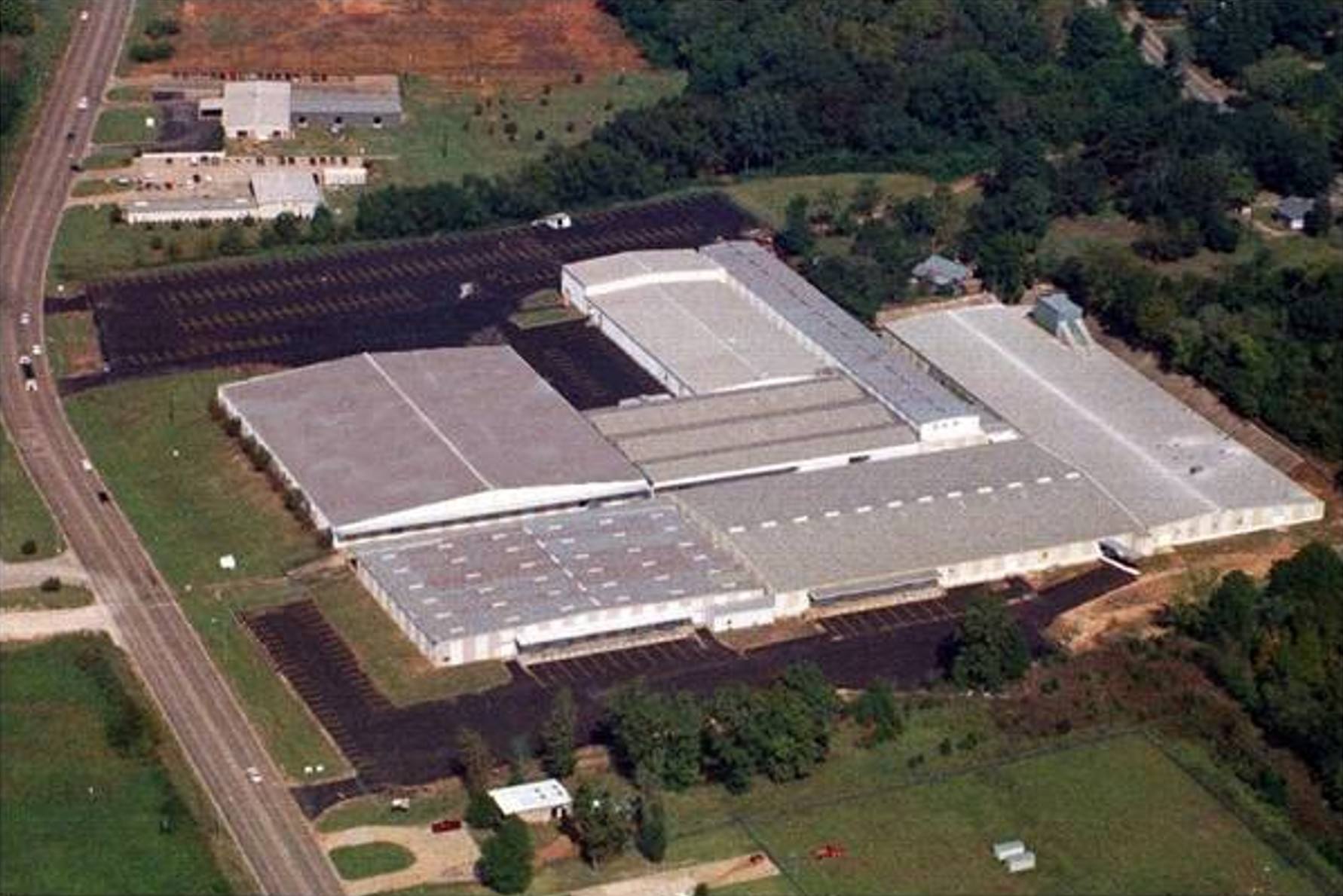 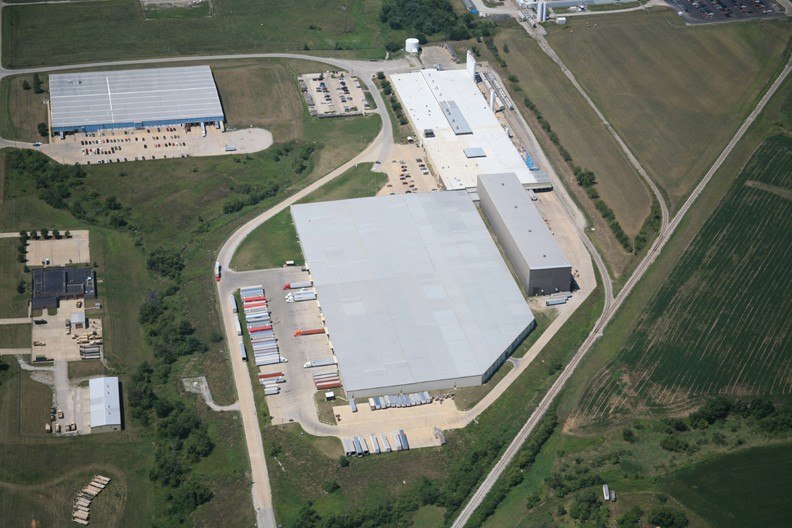 On November 26, 2007, Robert Varnedoe, Lee Container V.P. of Sales, announces the purchase of the 660,000 square foot former Rubbermaid facility in Centerville, IA.  With this acquisition, Lee customers in the Midwestern United States enjoy many benefits, including lower freight costs and shorter lead times which are so important to the agricultural chemical industry. 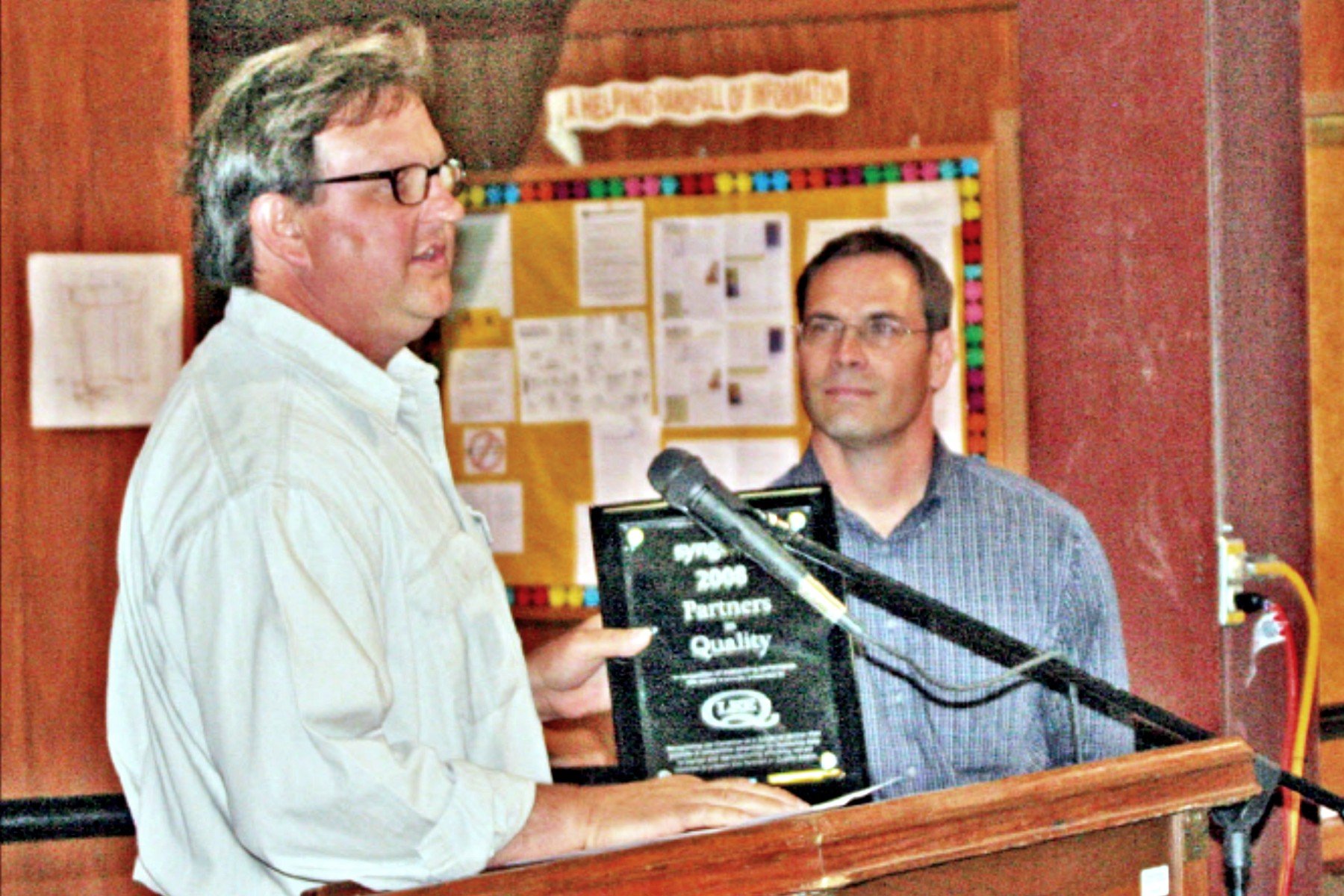 Swiss-based global chemical manufacturer Syngenta recognizes Lee Container with its “Partners in Quality” Award.   Syngenta has over 30,000 world-wide suppliers.   With a Quality Rating of 99.8, Lee is one of very few companies to receive this award.  Speaking at the award ceremony, John Shumate (quality manager Syngenta North America) said “Thank you for your performance, future performance, and we look forward to doing business with Lee Container for a long time.”  Lee Container has since earned this award for an exceptional seven consecutive years. 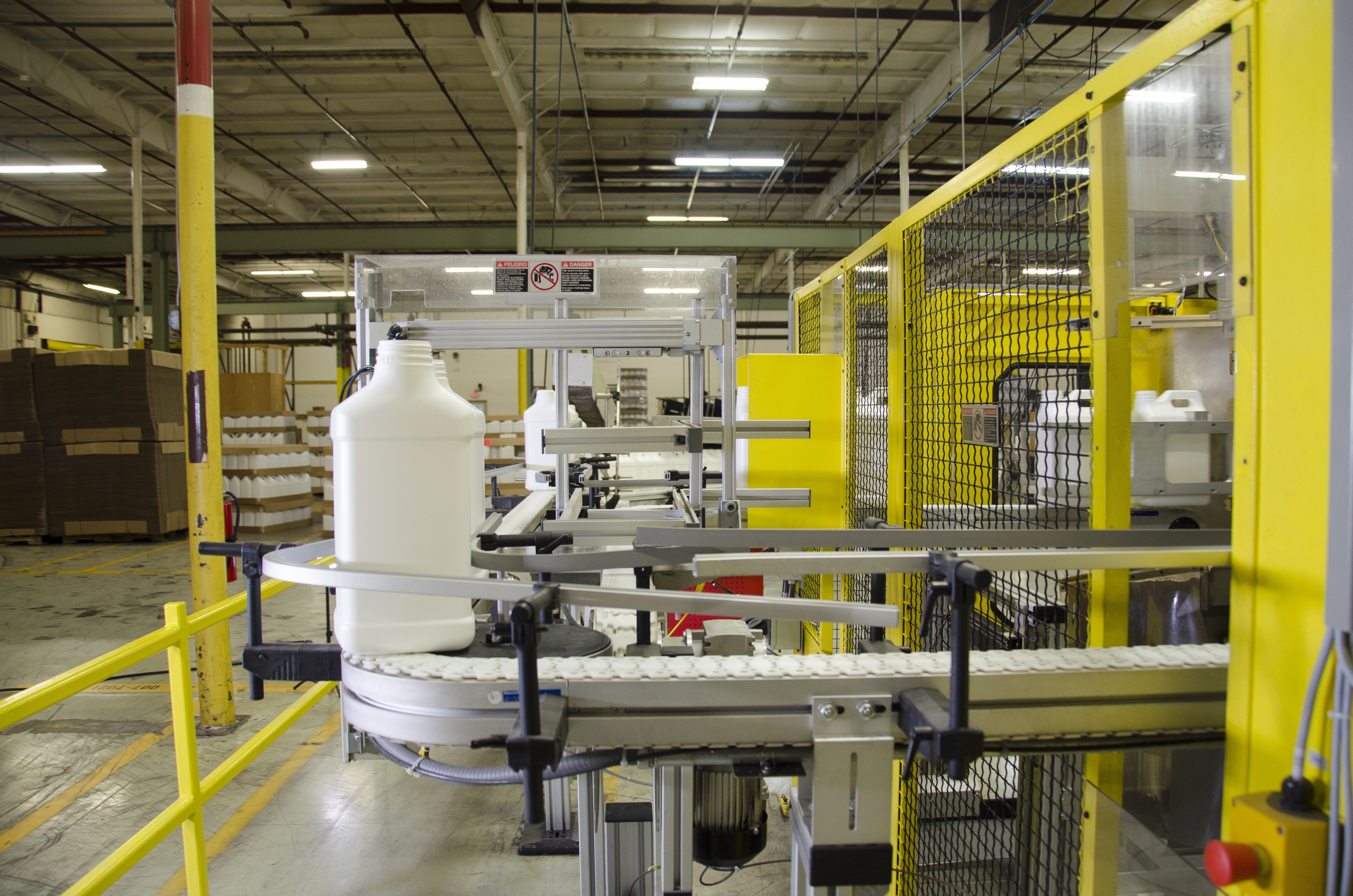 Since 2012, all new production equipment deployed by Lee Container is of the shuttle type, which increases efficiency and reduces maintenance costs. 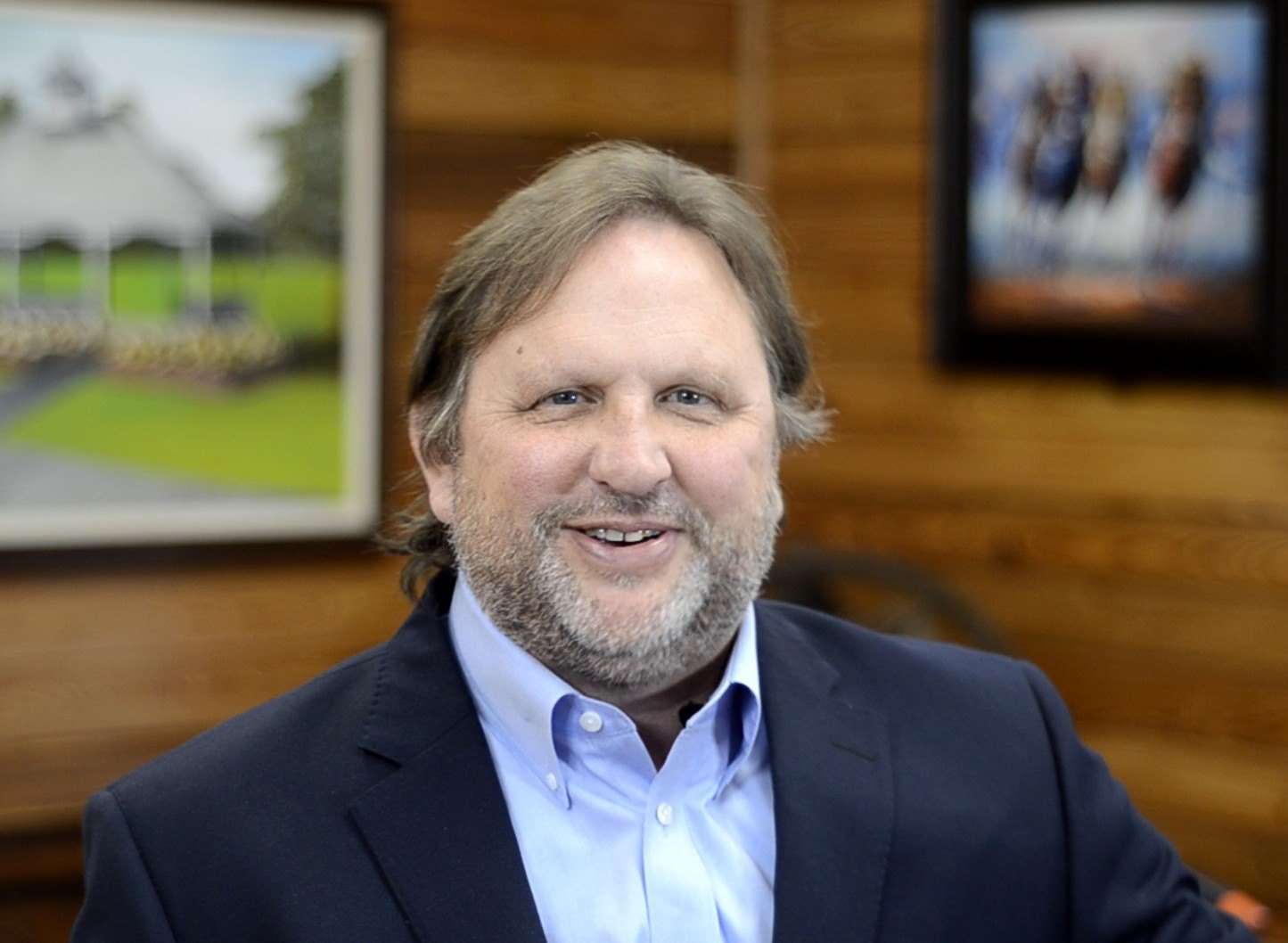 Robert Varnedoe, formerly Executive VP of Sales, succeeds Donald Lee as President of Lee Container.  His experience with the company (he joined Lee Container at its inception in 1989) assures continuity and signals a new generation of leadership for this family company. 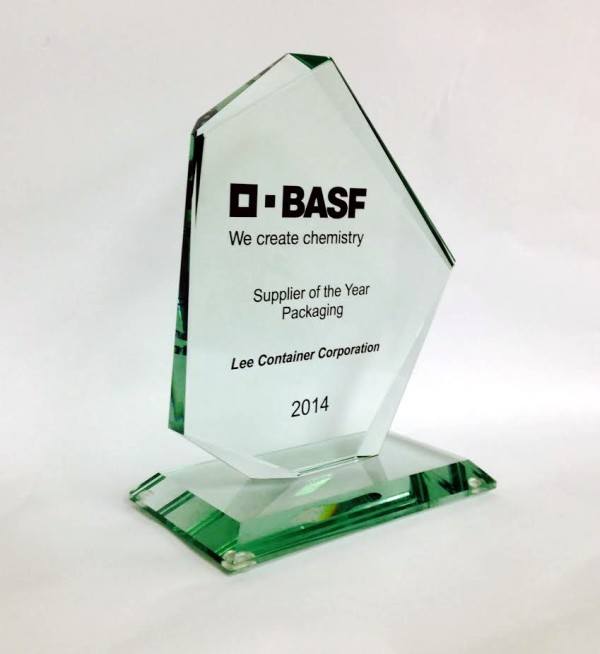 BASF recognizes Lee Container with its Premier Partner Award, recognizing Lee’s work with its Agricultural Chemicals division.  Lee Container serves BASF in its eight locations nationwide, and is the only company to have been so honored. 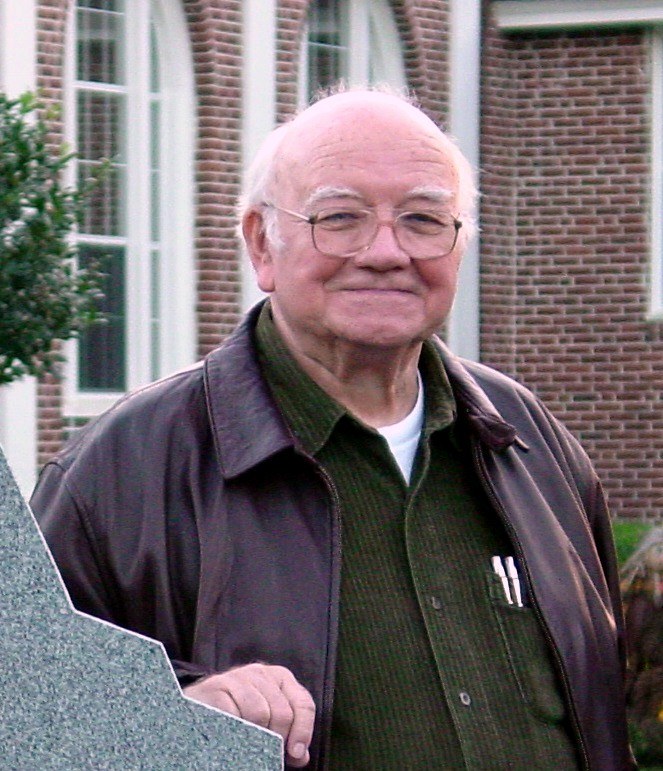 Donald Lee passes away on October 17, 2014.  Lee Container continues to be a family company, with Lee family members serving actively in the senior management of the Company. 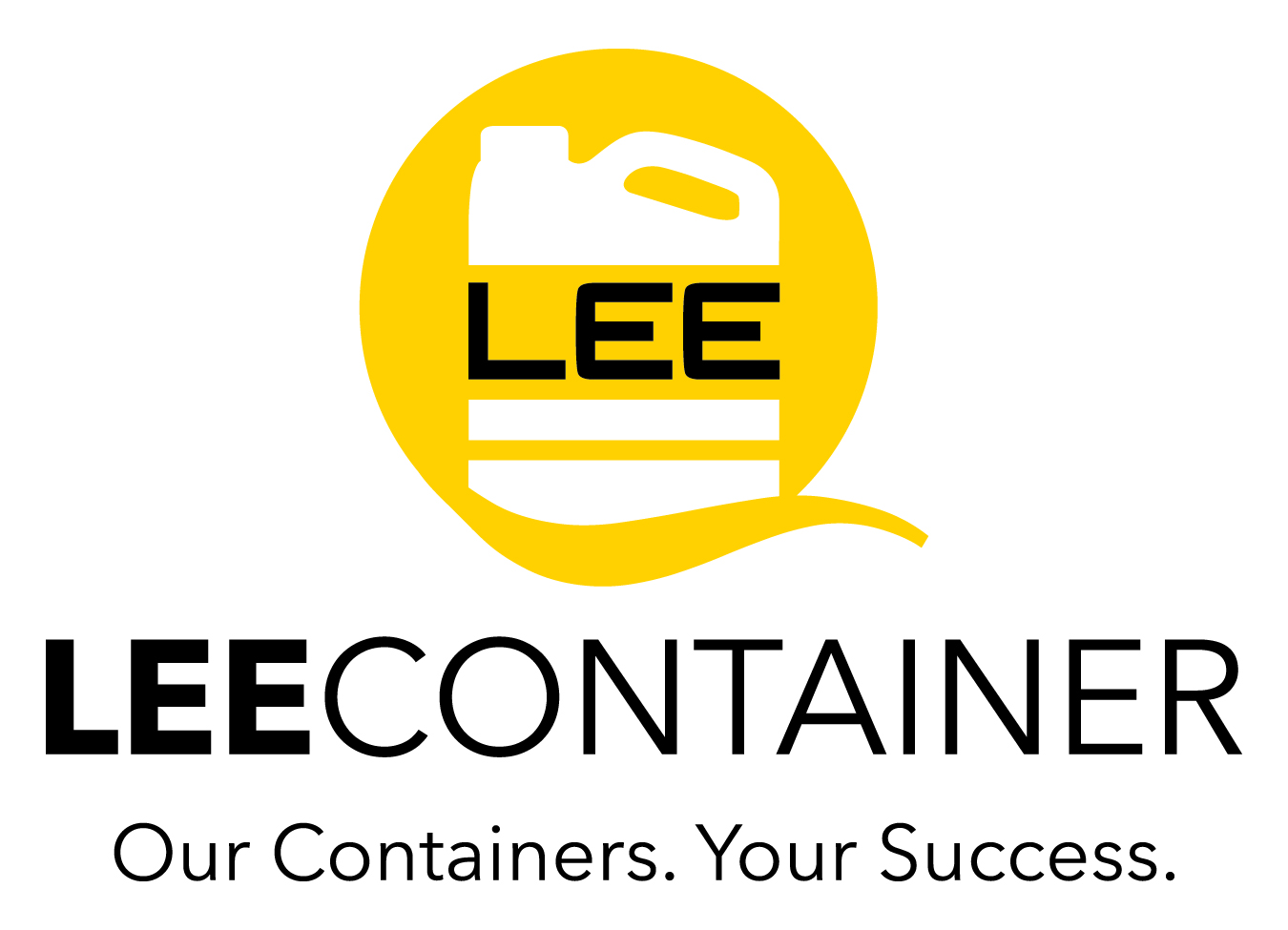 Lee Container unveils a new brand identity and launches a new website.  The new logo and tagline reflect the company’s renewed commitment to the legacy built by Donald Lee.  The company will continue to build on this legacy of sound values, hard work and a “can do” attitude when partnering with our customers.